Barbara Davis, PhD, director of the Medical Education Pathway (MEP) program, has mixed feelings about the size of the audience

in the SMD’s Upper Adolph auditorium. Nearly a third of the two hundred seats are already full, and students continue to trickle in as she begins her presentation. She has run out of handouts.

“It’s difficult,” Davis says. “We can only take fifteen of you into the Pathway.”

Throughout the informational session, Davis unabashedly tells them how hard this is. The Medical Education Pathway has a rigorous, two-year curriculum: the application process alone requires students to spend hours developing a formal proposal, securing a mentor, and obtaining multiple signoffs on their teaching plans. Once accepted into the MEP, students commit to forty hours of teaching, not counting preparation time. There are numerous mandatory workshops and journal club meetings. The MEP students are responsible for fitting all of this into their schedules, already brimming with clinical clerkships and coursework.

But this doesn’t seem to scare very many students away.

“In medical school, you’re not going to have time for anything 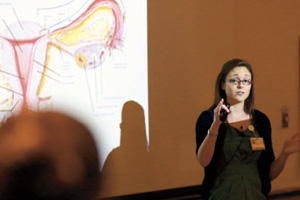 If you don’t set priorities,” says MEP participant Jessica Lindemann (MD ’15), who served as a tutor and teaching assistant throughout high school and college. She chose to come to the SMD, in large part, because of the MEP program. “I didn’t come across another medical school that offered anything like it.”

Senior Associate Dean David R. Lambert, MD, put the MEP committee together in 2007. It devised a unique curriculum, and the Pathway accepted its first two students in 2009. Since then, eighty-seven more students have enrolled, and Lambert, Davis, and another committee member, Celeste A. Song (MD ’08, Flw ’14, MSc ’14), are now evaluating the program. In a study published online in Academic Medicine, the trio report success.

The MEP students are teaching in every first- and second-year course, as well as third-year basic science blocks. Their lectures and small group activities bring new topics into the classroom.

“I learned so much from her!” says Davis, who turned a Human Structure and Function (HSF) lecture over to Lindemann. “Her lesson on the female reproductive system incorporated clinical applications, because she’s had some experience there, and I’m a basic scientist.”

The students taking the courses are usually enthusiastic about the MEP student presentations, while not being shy in offering constructive criticism.

“After my first lecture, the students said there was a lot of information for the amount of lecture time,” Lindemann recalls. “That resonated with me. I was so focused on including every detail of the female reproductive system, because the HSF course helps lay the foundation for the rest of medical school and I didn’t want them to miss anything. But that wasn’t realistic.”

With guidance from Davis, Lindemann fine-tuned her lecture and gave it again the following year. While she’s still waiting for the student assessments, they were obviously impressed when she finished. Allowing the MEP students to revise their work is a key component of the program; it leads to their growth and development as teachers.

Committee members continue to study the program, which they view as a model for training the next generation of teachers. If adopted on a wider scale, this model could potentially help meet the shortages of academic medical educators. But for now, the fact that it is so unique to Rochester is a bonus for Lindemann as she interviews for a surgical residency.

“It definitely catches their attention,” she says. “Part of the role as a physician is to teach, and the MEP helped me to develop that skill set. It was a fantastic opportunity.” 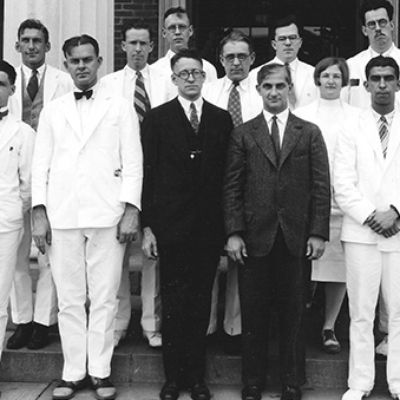