When Edward Messing, M.D., F.A.C.S., assumes the American Urological Association (AUA) presidency in May 2022, he will follow in the footsteps of other leaders in the field from the University of Rochester Medical Center. 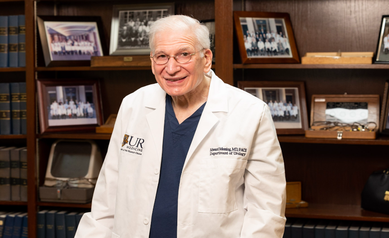 Prior URMC department leaders who served as AUA president include Abraham T.K. Cockett, M.D., from 1993-1994 and Irwin N. Frank, M.D., from 2000-2001. All three leaders are renowned for advancing urology nationally and internationally through landmark discoveries and their commitment to mentoring the next generation of urologists.

“As a leading academic medical center, URMC has a long tradition of providing the best possible urological care to patients, ensuring that our care is based on evidence-based research,” said Jean Joseph, M.D., M.B.A., chair of URMC’s Department of Urology. “Ed Messing, like Irwin Frank and Abraham Cockett, has made an indelible impact on improving patient care through science and innovation.”

“None of their outstanding achievements were created in a vacuum,” Joseph added. “They were the result of URMC’s strength and support and of our department’s infrastructure – established by our first department chair, Dr. Winfield Wentworth Scott – that fosters collaboration, discovery and intellectual curiosity.”

From the Public Health Service to groundbreaking urology care and research

Edward Messing’s path to a legendary urology career and the AUA presidency was sparked by a drive to complete his urology surgery residency and a commitment to the U.S. Public Health Service Commissioned Corps.

Facing the certainty of being drafted into military service, Messing was determined to finish his urology residency at Stanford University, and he hoped to defer military duty until the residency ended. So, instead of possibly being drafted to serve immediately, he enlisted in the Public Health Service (PHS), a service branch created by President John Adams that today protects, promotes and advances the nation’s health and safety.

While the PHS promised Messing the rank of lieutenant commander following his residency, it appointed him at the lower rank of lieutenant, which also carried a $5,000 lower annual salary. Messing wrote letters to the President of the United States, California’s two U.S. Senators and his local Congress member, Rep. Pete McCloskey, advocating for the PHS to honor its higher-rank pledge.

An aide to Rep. McCloskey, then the ranking minority member on the Merchant Marine and Fisheries Committee overseeing the PHS, called Messing and said, “The Congressman wants to make sure, are you willing to serve or not?” To which Messing replied, “Of course, I made a commitment. The service didn’t honor their commitment.”

With the Representative’s support, Messing entered the PHS as a lieutenant commander assigned to New Orleans, where he served for two years while holding an adjunct faculty position at Tulane University. After the PHS service, Messing completed a two-year fellowship in urologic oncology at UCLA and held a faculty appointment for 14 years at the University of Wisconsin at Madison – the last 10 years serving as director of Wisconsin’s urologic oncology program.

He became chair of the URMC Department of Urology in 1995, a position he held until 2018. Under his leadership, the department became Upstate New York’s leading provider of advanced urological care. Today, Messing remains an active clinician and surgeon. He also serves as a professor of urology, oncology and pathology.

A celebrated expert in all facets of urologic oncology, including the diagnosis and treatment of cancers of the prostate, bladder, kidney, testicle, penis and other genitourinary organs, Messing conducts extensive research in the biology of bladder and prostate cancers. He has been the principal investigator on numerous clinical studies for the detection, prevention and treatment of genitourinary cancers. 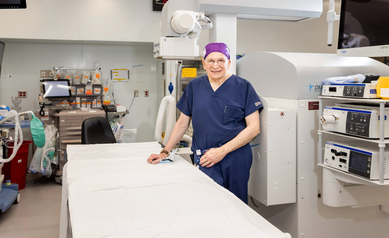 Much of his research focuses on helping patients through studies that compare novel treatments to existing ones. One of his primary interests is bladder cancer, a disease in which early recognition is critical. He led a bladder cancer study that resulted in the first simple, at-home urine test to screen for the disease and published a landmark study that concluded that bladder cancer screening in healthy men can lead to earlier detection and reduced mortality.

Other important clinical trials for urologic cancers explored difluoromethylornithine’s ability to prevent bladder cancer's recurrence; the use of adjuvant hormonal therapy on men with prostate cancer found to have spread to regional lymph nodes at surgery to remove the prostate; the use of adjuvant immunotherapy (Interferon alpha) in patients with locally extensive renal cell cancer after seemingly complete surgical removal; and whether instillation of a chemotherapy drug immediately after removal of a bladder cancer could reduce the likelihood of tumors recurring. Among studied patients with suspected low-grade non-muscle-invasive urothelial cancer – which frequently recurs after excision by transurethral resection of bladder tumor (TURBT) – immediate postresection intravesical instillation of a chemotherapeutic agent, gemcitabine, significantly reduced the recurrence risk.

Messing is currently studying whether bladder cancer has molecular features that can predict response to gemcitabine, including whether certain enzymes that metabolize gemcitabine rapidly could make cancer cells more resistant.

A related project that Messing and URMC are involved with is exploring how an implementation science framework can increase rates of instilling postoperative intravesical chemotherapy in patients with suspected low-grade, nonmuscle-invasive bladder cancer, thereby improving cancer care while reducing patients’ suffering and medical costs. Through these efforts, the rate of appropriate utilization of intravesical gemcitabine increased from 11 percent to almost 90 percent after a year at the University.

Messing is the author or co-author of 26 book chapters and 346 urology journal articles, and he has been honored with numerous awards. Accolades include the AUA’s Presidential Citation and prestigious Ramon Guiteras Award, as well as the Society of Urological Oncology’s SUO medal and its Distinguished Service Award.

A leader in the field

Messing has held previous leadership positions in the AUA and in other national, regional and local organizations, from being president of the AUA’s Northeastern Section and the Society of Urological Oncology, to being interim director of the National Cancer Institute-designated URMC Cancer Center.

In 2020, Messing decided to run for AUA president. His wife of more than 50 years was diagnosed with lung cancer, so he had to make sure that she was comfortable with him seeking the position. His wife was doing well at the time of the decision, so they agreed the time was right. In addition to her husband meeting the challenges of the position and serving fellow urologists, his wife looked forward to accompanying her husband at the association’s various events around the world.

Messing won the election and will assume the role of president in May 2022. Unfortunately, his wife will not be by his side as she passed away in May 2021.

Goals for the AUA

As AUA president, Messing aims to stimulate research, making the association an even bigger research enterprise than it is today through new programs such as a larger grant pool for junior faculty and residents.

Expanding the advocacy role is another major objective. A key issue he plans to address is student-loan debt and its impact on urologist shortages in rural communities.

“Many urologists come out of medical school with an incredible amount of debt, and that has a lot to do with where they decide to practice – choosing places where they can make a better living,” he said. “As a result, there is a core distribution of urologists in major urban areas, leaving major shortages in rural communities.”

Messing plans to lobby for the expansion of an existing U.S. government program that forgives some debt for primary care physicians practicing in rural communities to include urologists and other specialists. He also wants to address this issue in Canada, where the rural urologist shortage is an even greater concern.

Based on his accomplishments in scientific discovery and on his advances in improving patient care, there is little doubt that he can achieve these goals and more as AUA president. 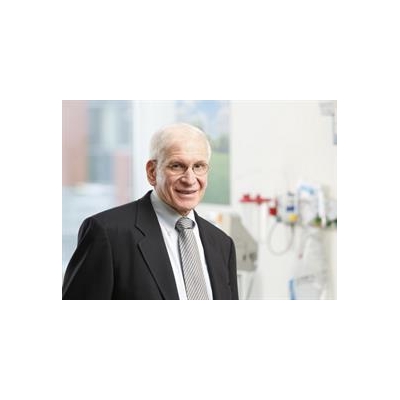 Messing Honored for Career of Innovation and Leadership in Urological Care