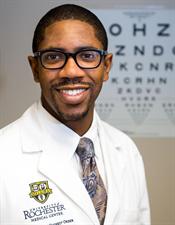 A student with vision: David Paul (M.D. '16) hopes to improve the understanding of how neural and visual processes are connected.

Five years ago, University of Rochester School of Medicine and Dentistry student David Paul (M.D. ’16) was taking part in a UR summer research program, and was looking for a neurosurgery project to sink his teeth into.

“David came to talk with me about ideas, and I posed a simple question,” says UR Medicine neurosurgeon and pituitary program co-director G. Edward Vates, M.D., Ph.D., who performs about 120 surgeries a year to remove pituitary tumors, which are often associated with vision loss. “I asked him, ‘When I take the tumors out, why does vision improve in some patients more than in others?’” 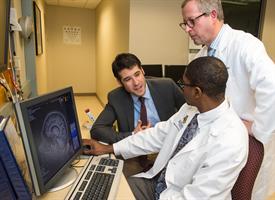 “But I never anticipated how far he would go to solve that challenge,” he says. “It is common for students to come into a lab, be handed a project, and then run with it. It is uncommon for students to come into a lab, create their own project, and run it all the way to completion. In all of my time here, David is the only student who has made that kind of leap.”

At its most basic level, Paul’s pilot research has verified an effective way to view and measure changes in myelin (white matter) within the brain’s visual system, in order to better predict a patient’s visual recovery following pituitary tumor removal. More broadly, however, his work offers another clue to the mystery of neuroplasticity—the brain’s native ability to fix itself over time—and may one day give doctors a “crystal ball” to explore the effectiveness of treatments for a wide range of diseases and injuries affecting the white matter of the brain.

Paul’s scientific achievements, in combination with his ongoing mentorship to Rochester city school students, have made him the first-ever UR medical student to receive The William and Charlotte Cadbury Award from the National Medical Fellowships and Association of American Medical Colleges (AAMC). Every medical school across the country nominates a student for this national honor, but only one student is chosen. Paul will receive the award, and be welcomed into the AAMC’s Future Leaders of Academic Medicine, at an awards ceremony in Baltimore. Md., Nov 9.

“It’s an incredible honor for me,” says Paul, a native of Grand Rapids, Mich., who completed his undergraduate work at Hope College in Holland, Mich. “I’m very grateful to Dr. Vates and all of my mentors here for their constant support through every endeavor, and for giving me the guidance and direction, as well as the space and independence, to take ownership of the project and see it to fruition. That just doesn’t happen in every lab. It has been such a good fit for me here.”

While it has long been understood that pituitary tumors cause vision loss by compressing the optic nerve, there is significant variability from patient to patient in both the initial level of visual impairment, and the degree of post-surgical visual recovery they will experience, that cannot be linked to tumor size, a patient’s age, or preoperative exam.

“The data indicate a connection between the integrity of myelin surrounding the optic nerve track and the return of visual function after tumor removal,” says Paul. “Simply put, the pressure from the tumor causes the ‘hose’ of white matter along the optic nerve to leak, or demyelinate. But finding a way to measure this in actual patients was the challenge.”

Paul then knocked on the lab door of Bradford Mahon, Ph.D.,an assistant professor, who conducts research into cognitive and neural processes at the Rochester Center for Brain Imaging. Together, they discussed using Diffusion Tensor Imaging (DTI), to proportionally measure the radial and axial diffusivity of the curved white matter tracks.

“We had been thinking for a while ‘Wouldn’t it be great if we could use DTI on these patients?’ says Mahon, whose background is in experimental psychology and using functional MRI to study brain function. “While there are some scientists looking at the back-end of DTI with animal models, very few individuals are doing this kind of research with patients anywhere in the country, because it depends so heavily on basic and clinical scientists working in lockstep with one another. That’s something special we have here, and are the first group to present the findings in such a solid way.”

Mahon says that what began as a short-term project “to keep a smart medical student busy for the summer,” quickly gained momentum thanks to Paul’s relentless curiosity, and perseverance. Paul took a year off medical school to focus exclusively on his research, capitalizing on the guidance and mentorship of DTI experts at the UR, and teaching himself computer programming along the way. One year turned into two years, and matriculation into the Neurobiology and Anatomy master’s program.

“It wasn’t until my second year of dedicated research time, that the paper started coming together and we began to understand the broader significance of the findings,” Paul says.

But there were a few hurdles to overcome first.

“Usually, graduate students in the lab are given projects where the challenges have been somewhat foreseen and you can kind of guide them over the obstacles that they’re going to encounter,” says Mahon. “But this is a project where we as his mentors couldn’t really anticipate them because it was uncharted territory.”

An elegant example of that, he says, is that white matter tracks are curved like rivers flowing through a mountainside, making them hard to measure.

“So he actually explored the algorithms that are used in the geospatial mapping of river channels,” says Mahon. “It was ultimately one of those algorithms that he was able to re-work and apply in the context of white matter tracks. That was a big breakthrough. We could measure these white matter pathways at a high resolution all along their curved trajectory as opposed to just measuring the whole thing. We could measure the myelin track as you move from the tumor, and march through the brain, and get measurements at every point. I had never worked in this method of studying the white matter tracks, and I think I would still be saying that, had David not joined our lab.”

Data was collected and analyzed from 23 patients using DTI. The patients were separated into three groups: some with large tumors and severe damage along their optic tracks, some with small tumors and minor damage, and healthy subjects. They were followed before surgery, and at two- and four-week intervals post-surgery. By the end of the study, all of the patients had either regained their original vision or had significantly improved vision after surgery, and all demonstrated a correlation between the re-growth of their white matter fibers and their amount of visual recovery.

Based on Paul’s pilot study, a National Institutes of Health R01 grant application has been submitted to fund a larger, longitudinal study.

The hope is that the results will further support the technique as “a way doctors can see whether or not what’s happening in the brain is what they think should be happening, and whether it correlates clinically” in patients, says Paul.

It’s a predictor that may have applications well beyond pituitary tumor patients, says Vates.

“It may have profound applications in more common diseases that affect the white matter of the central nervous system, like multiple sclerosis and other types of brain tumors, as well as spinal cord injury, traumatic brain injury, stroke,” says Vates. “Many of the drugs used to treat brain issues are aimed at trying to re-myelinate fibers, and this is a potential way to see if they are effective.”

Director of the University of Rochester’s Neurorestoration Institute and distinguished professor Bradford C. Berk, M.D., Ph.D., says the project perfectly illustrates translational research, and what can be accomplished with close collaboration between experts and scholars of science and medicine, and a community of willing patients.

“Being able to treat patients while exploring opportunities to learn is very critical to reaching conclusions like this,” Berk says. “This can provide fundamental insights into other forms of recovery from brain or neuron damage, and is very relevant to answering the basic questions of how the brain can recover from injury.”

When he was in third grade, Paul’s parents gave him a copy of the book “Gifted Hands” (the story of current presidential candidate Ben Carson, M.D., who grew up in inner-city Detroit and became one of the most celebrated neurosurgeons in the world), and asked him to write a summary every day of what he read.

“I didn’t realize it right then, but when I was a little older, and could process it, I found it fascinating,” says Paul, whose goal is to become an academic neurosurgeon, and use the operating room as an extension of the laboratory and apply research to the care of patients. “I loved the sciences, and worked hard, and from there doors and opportunities to shadow opened up. After meeting Dr. Vates six years ago, I knew I was in the right place.”

What further sets Paul apart is his desire to give back to the city he lives in, too.

Paul was one of the co-founders of Rochester’s Minority Male Leadership Association (MMLA)—along with neurosurgery resident Clifford Pierre, M.D., in 2013—which supports young men of color through mentorship, networking and support. The association has formed partnerships with several city schools and organizations, and works to bring high school students and UR undergrads, faculty, and staff together, with the ultimate goal of improving the city’s nine percent graduation rate for black male students.

“Our goal is to connect with these young men and share our stories,” says Paul. “And if we are able to grab one young man, and influence them, and they reach out and grab another, we’re going to see success, and slowly move the needle on that graduation rate.

They know academics are important, but they don’t have the confidence to make that positive change. That’s where we come in to teach them, and help them carry that torch with their classmates.”

In addition to his work with MMLA, Paul has been involved with the Student National Medical Association (SNMA) for the past five years, helping to coordinate an annual pre-medical conference, during which 200 local high school and undergraduate students interested in health care attend educational sessions and workshops, hear inspiring speakers, discuss medical cases, and take part in hands-on learning.

Paul says that over the past five years, past conference participants have been accepted to the University of Rochester School of Medicine and Dentistry, Duke University Medical School, and Drexel School of Medicine. The relationships that high school and undergraduate students form with medical students and faculty members through the SNMA conference are pivotal to their success.

“Working with Drs. Vates and Mahon opened my eyes to the importance of mentorship,” he says, “and I want to pay it forward to the next generation of doctors and research scientists as they pursue their career goals.” 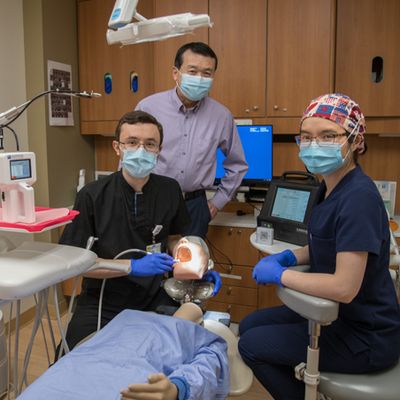 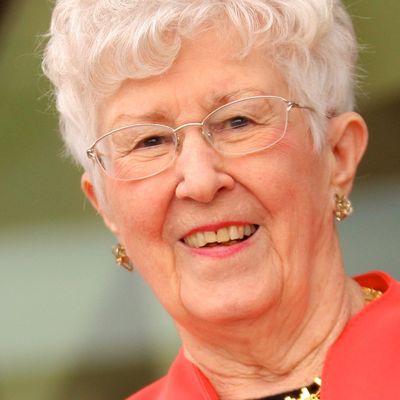 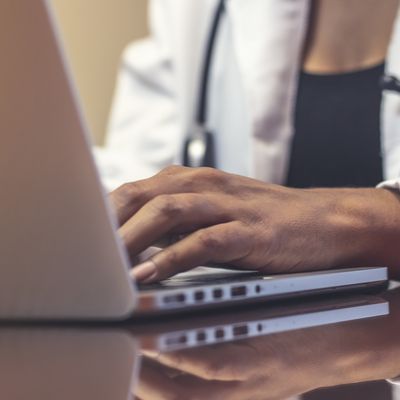